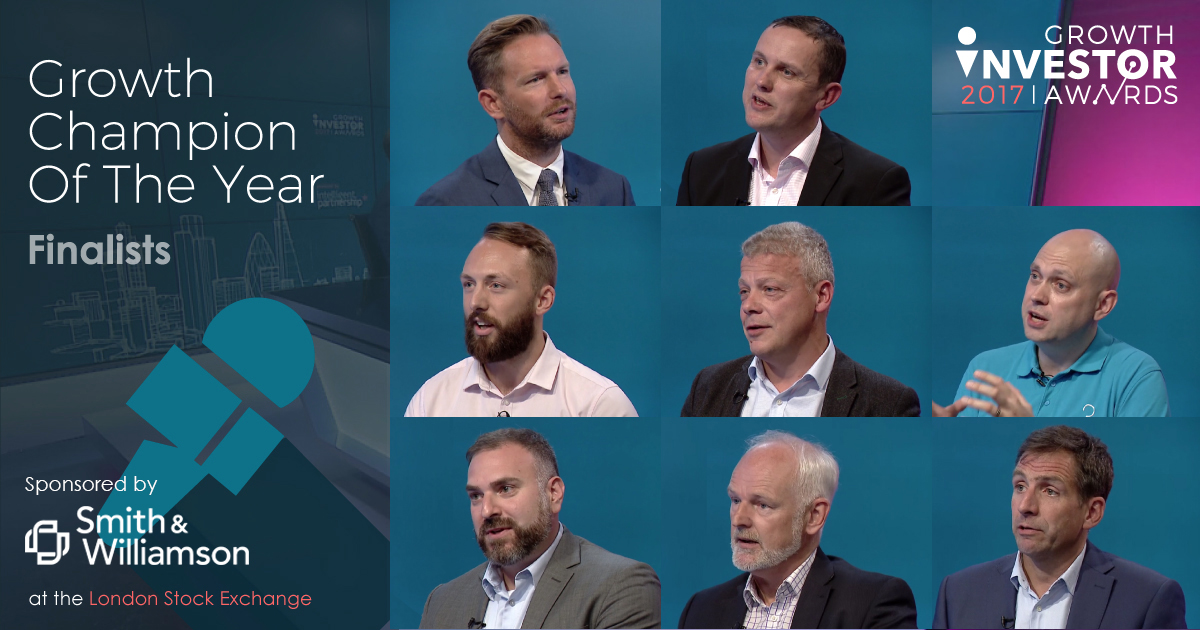 Every start-up and early-stage business is unique in its own way. But in our experience, the best ones share certain key ingredients that are vital to becoming successful. Inspiration, determination, a strong network and access to the right capital – along with backing from those smart enough to buy into the vision. Also, more often than not, they possess a business idea that leaves others saying: “now why didn’t I think of that?”

The good news is that from where we stand, UK entrepreneurs have these qualities in abundance. This is why it has been so hard to select just eight companies this year, before a final round of judging they will now go head to head in a public vote. It’s time to have your say in who should be crowned the 2017 Growth Champion of the Year; sponsored for a second year by Smith & Williamson, this is the UK’s highest accolade for SMEs that have received venture capital scheme funding.

You can vote for the 2017 Growth Champions here: growthinvestorawards/vote

When we launched this award category in 2016, our aim was to celebrate those companies that managed to find the right combination of those characteristics that have made the most of the available resources to deliver truly exception growth.

Last year’s inaugural award was won by Eve Sleep, which launched its direct-to-consumer ‘mattress in a box’ company in February 2015. And while Eve Sleep faced strong competition from the other finalists, its growth story is simply sensational. This year it listed on the Alternative Investment Market, was voted number one in the Startups 100 Index of the UK’s hottest start-ups, and most recently announced a huge deal to supply its mattresses to the German department store chain Karstadt. Today, Eve Sleep is one of the UK’s fastest-growing consumer brands, and some of that success can be directly attributed to venture capital funding and the support of the UK’s thriving smaller company ecosystem.

Guy Tolhurst, our MD, commented: “It’s been thrilling to watch Eve Sleep’s growth ambitions matched by its continued success, and it remains a poster child for entrepreneurs hoping to start a business, companies looking to scale up, and the venture capital industry keen to back the next great business.  Following in Eve Sleep’s footsteps is no easy task, and great things are expected of this year’s eight finalists. And, proving that great business ideas can flourish in almost any environment, they come from a broad variety of sectors.”

Of course, this means the new crop of finalists has some rather big shoes to fill. But the calibre of this year’s entrants has exceeded our expectations. Which means our judging panel also has its work cut out to determine which one deserves the accolade this year.

Between them, our eight finalists have received more than £40 million of tax-advantaged venture capital, with an average investment of just over £5 million. They employ 780 people, more than half of which are working outside of London.

Guy Rigby is Head of Entrepreneurs at Smith & Williamson. He said: “As this award demonstrates, scaleability is about more than just figures. Scale-ups may be identified by their rapid growth in turnover, but they are they are the engine of the UK economy, creating jobs and wealth.”

These companies have the potential to be tomorrow’s household names. But they are already making a huge economic contribution right now. Not just by generating valuable tax revenue, and creating thousands of new jobs, but also by sparking innovation, disrupting and displacing traditional business models, and pushing forward with regional and international expansion plans.

Since we launched the Growth Investor Awards back in 2015, one of the most rewarding aspects for us as a company has been to hear the stories of some of the outstanding UK growth-focused businesses out there.

Now it’s your turn to discover and support them. Last year, our eight finalists received more than 10,000 votes between them. Visit growthinvestorawards/vote to watch interviews with the founders and senior management of each finalist, and once you’d decided which one deserves to take home the title, please vote.